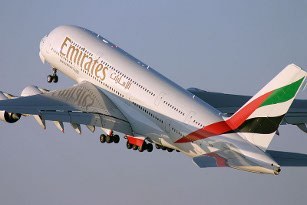 Emirates has announced a 75 per cent additional capacity increase between Dubai and Baghdad from the beginning of February, boosting its services to seven flights per week in a move to support Iraqi business segments.

"Since launching flights to the Iraqi capital three months ago our operations have gone from strength to strength, on both the passenger and cargo side," said Ahmed Khoory, Emirates' Senior Vice President, Gulf, Middle East and Iran.

As well as the Baghdad flights, Emirates operates a four-times-weekly service to Basra and has offices in Basra and Baghdad, making it easier for both business and leisure travellers in Baghdad to connect to Emirates' network of global destinations.

"Emirates' additional flights are a key element in supporting Iraq's rebuilding efforts. In particular the UAE has a significant interest in promoting trade and investment with Iraq," Mr Khoory added.

According to Iraqi Embassy officials, the volume of investments of UAE companies in Iraq reached US$3 billion by the end of 2010 and is expected to rise to US$6 billion in the coming years.

Emirates SkyCargo too will continue to play a critical role in transporting important commodities into Iraq including, foodstuffs, medical products, spare parts and telecommunication equipment.