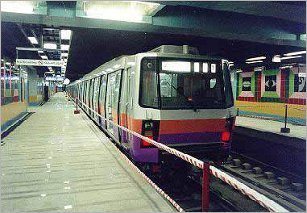 The first phase of Cairo's metro Line 3 is now open.

Phase one saw 3,500 people, including 85 expatriate staff, worked on this project, which took 51 months to complete. Once completed, Line 3 will cross the Egyptian capital from east to west, from the airport to the districts west of the Nile.

The development of the Cairo metro system is part of a large-scale plan aimed at serving the transport needs of the Greater Cairo area up to 2022.

The US$310.4mn Phase 1 civil engineering contract covered construction of a 4.2 km tunnel section and five stations. Meanwhile, VINCI subsidiary ETF-Eurovia Travaux Ferroviaires led the consortium responsible for the track works package. This included the supply and laying of 11 km of track and the power rail in the tunnel.

VINCI built the first two metro lines in Cairo, which now serve nearly four million passengers per day, and is currently working in a consortium with Bouygues Travaux Publics, Orascom and Arab Contractors on Phase 2 of Line 3 (6.5 km tunnel and five stations).

Phase 2 is currently 6 per cent completed and is scheduled for handover in early 2014. The National Authority for Tunnels (NAT) is working on the design studies for Phase 3.