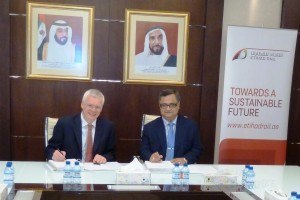 PCM Strescon will be responsible for the design and manufacturing of railway sleepers as well as the production of the sleeper manufacturing facility for Phase One of the railway network - the 266km route linking Shah, Habshan and Ruwais in Abu Dhabi's Western Region.

For the Etihad Rail network, PCM Strescon will oversee and manage the design, manufacturing, maintenance and storage of the railway sleepers that will support the network's tracks that will carry the trains transporting granulated sulphur (in partnership with Abu Dhabi National Oil Company) for export at the port of Ruwais.

The award of this contract marks a major milestone for Etihad Rail and comes ahead of the laying of the first tracks for the 1,200km network in Q4 of 2012.

Commenting on the award, Etihad Rail CEO Richard Bowker, said, "This award clearly highlights that we are moving full speed ahead with the railway network – one that will transform the transport sector in the UAE."

Etihad Rail's US$10 billion railway project is forecast - over the next two decades - to grow to transport up to 50 million tonnes of freight and 16 million passengers per annum, connecting population centres and opening up channels for trade.