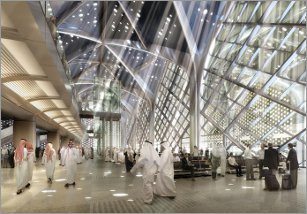 A Saudi-Spanish consortium has emerged as a frontrunner among bidders to win an US$8 billion contract to build a high-speed rail network linking Makkah, Jeddah and Madinah.

"The Saudi Railways Organization (SRO) has already invited the consortium to its headquarters in Dammam to discuss the technical details of the rail network next month," said Spanish Ambassador Pablo Bravo in Riyadh.

Bravo said the SRO had sent a letter to the local Al-Shoula Group and the Spanish companies of the consortium inviting them to hold a meeting to talk about the 450-km project.

France's Alstom and its national railway operator SNCF is another bidder in the project. The Al-Shoula consortium includes the local Al-Rosan and about eight Spanish companies, including Copasa, Imathia, Cobra, OHL, Dimetronic, Inabensa, Indra, Talgo and Renfe.

The SRO announced earlier that only two consortia, the French-Saudi Al-Rajhi Alliance and the Spanish-led Al-Shoula consortium, had submitted their technical and financial offers.

Asked about the possibility of Spanish and Saudi consortium winning the contract, Ambassador Bravo said: "The Spanish railway technology offered to Saudi Arabia has been largely appreciated."

Spain, he said, has been a world leader in high-speed rail networks and now has the longest such system in Europe. It also plans to link all the provincial capitals with a high-speed railway of a total estimated length of over 9,000-km by 2020.

Bravo neither confirmed nor denied reports that the Spanish consortium had won the contract. The AFP report, however, quoted a spokesman for the Spanish Transport Ministry as saying that "the process is very advanced, the Spanish bid is in a good position but it is not yet finalized."

However, the business newspaper El Economista said that Spanish Transport Minister Jose Blanco had confirmed to members of the consortium that they had won the contract. Another Spanish business paper, Cinco Dias, said the consortium has received official confirmation from Saudi Arabia. The project, once completed, will provide comfortable transport on electric trains that will run at a speed of 350-km per hour.

The railway is expected to carry three million passengers a year, including Haj and Umrah pilgrims. This will also help to relieve traffic congestion on the roads. The Haramain High Speed Rail project is also known as the "Western Railway".

Spain has had a long experience in railway sector with its first railway line built between Barcelona and Matar? way back in 1848.