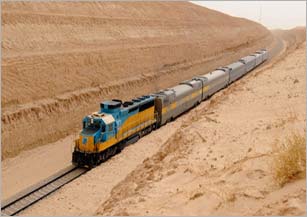 The Saudi Railway Company (SAR) has completed the construction of a 1,392-km-long railway line from Northern Border Province to Ras Al-Zour Seaport on the Gulf.

The railway line links the phosphate mines in Hazm Al-Jalameed in the Northern Border Province to the manufacturing area in Raz Al-Zour, passing through Jouf, Hail, Qassim and into the Eastern Province.

Minister of Finance Ibrahim Al-Assaf said the company began the experimental operation of the line with the first shipment of phosphate from the mines of the Saudi Mining Company on special rail car which it unloaded in Ras Al-Zour.

Secretary-general of the PIF, Mansour bin Saleh Al-Miman, who is chairman of the board of directors of SAR, said that for the construction of the line, 350 million cubic meters of sand and rocks were removed, 71 bridges and 912 crossings were built and more than 170,000 tonnes of steel used.

The chairman said the company is currently working to complete work of passenger and goods lines extending from Riyadh to the borders with Jordan passing through Qassim, Hail, Jouf and Qurayat. He expected the project to be completed by 2014.