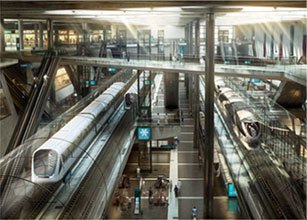 The new design-build contract, worth US$538.5mn, covers civil engineering works in eight underground stations, the construction of a viaduct over the motorway between Doha and the northern part of the country, and preliminary works on an LRT depot and maintenance workshop. The works are expected to take 38 months to complete.

The award of this new phase attests to the excellence of the works done by QDVC in the previous phases, which called for earthworks and civil engineering works in the cut-and-cover tunnels and ventilation shafts.

The new city of Lusail stretches over 37 sq km of waterfront. Organised into 19 mixed-use districts, it will eventually accommodate 200,000 residents and as many daily workers and visitors.

The light rail system will serve the entire new city and will interconnect with the regional transport network. The Lusail LRT has therefore been handed over to Qatar Railways Company, the newly formed authority.

The full Lusail LRT project will consist of four lines totalling 30 km, eight underground stations and 25 at-grade stations and is being built in several engineering study and construction phases.

The design phase was launched in August 2007, followed by earthworks and excavations for cut-and-cover tunnels in March 2009, tunnel construction in March 2010, and preparation of underground station construction in June 2011. The next and final phase of the works will include rolling stock and systems. Handover of the turnkey project is set for 2016.