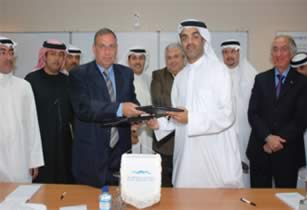 DUBAI MARITIME CITY, the world?s first purpose-built maritime centre, has announced the signing of a memorandum of understanding (MoU) with the Arab Sea Ports Federation to explore joint business opportunities.

The partnership is part of Dubai Maritime City's program to engage in long-term business relationships with leading regional and international maritime institutions and reinforce its competitiveness in international markets.

Dubai Maritime City's partnership with the Egypt-based federation effectively extends its network and partnerships and strengths its presence in key maritime locations across the region.

The MoU was recently signed by Amer Ali, CEO of Dubai Maritime City, and Rear Admiral Essam Eddin Badawy, secretary general of the Arab Sea Ports Federation, during a ceremony held in Dubai, as part of a visit by Federation Members to Dubai Maritime City. Also present were Ali Al Daboos, COO of Dubai Maritime City; officials from both organisations, including members of the Federation that represent various Arab ports and transport associations from Syria, Oman, Kingdom of Saudi Arabia, Palestine and the United Arab Emirates; and representatives from the Council of Arab Economic Unity and the UAE?s National Transport Authority ?This partnership is an important strategic move as we position Dubai Maritime City to be the premier maritime destination in the region," said Ali on behalf of Dubai Maritime City.

"In addition, it is also our aim to build on our common goals to enhance and strengthen the economic prospects of the region's maritime environment. ?