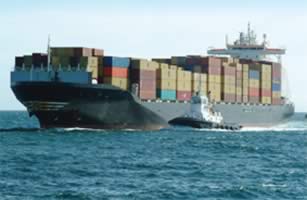 Industry officials saidQ1 of 2009 is still weak compared to Q4 of 2008, indicating a further slowdown in activity, but project a positive turnaround in business in the remaining part of the year.

"There are growing signs that profitability will return in the coming months. We see optimism returning, however, business is still down at the moment," Ken Bloch Soerensen, President and CEO of United Arab Shipping Company (UASC), told Emirates Business.

He said the fact that a number of container lines are beginning to increase rates on various routes is in itself a positive indicator for the container business. "We are still watching the market, we are not yet sure of the trend we are likely to see for the rest of the year. But there is some hope that things will get better," added Soerensen. Rates UASC increased its shipping rates on some routes effective from April 1.

Maersk Line, the world's largest container shipping line, said recently that from May 1 rates for dry cargo shipped from all origin points in the US and Canada to destinations in the Mediterranean and North Africa will increased by US$80 per 20-foot container and US$120 per 40-foot container, HighCube or 45-foot container. French carrier CMA CGM will also next month increase rates between North Europe and the US by US$160 per 20-foot dry container and US$220 per 40-foot/40-foot HighCube. Similar hikes have been announced by APL containers on its Asia- Europe trade route. Under pressure Freight rates, the main determinant for profitability in the container shipping industry, have come under pressure since the second half of 2008, with rates on some major trade routes falling more than 80 per cent.

In an effort to revive freight rates and improve utilisation, UASC, the world's largest container shipping company, said it would lay-up part of its fleet throughout this year. The company will take out of service three to four ships of up to 3,000 TEUs for a while during 2009 to help narrow the widening gap between demand and supply.

The company has also started a restructuring exercise for services across its global network by placing underutilised tonnage into trade routes where demand is relatively high. "Some of our older ships will be idle for a while during 2009 to ease pressure on utilisation," said Soerensen "By taking out some of the vessels, we will be able to bring back some level of utilisation on the remaining fleet, and this can help to push up freight rates." He said that the company was in no rush to increase the number of vessels to be laid up, adding that the decision would be based on market trends.

Between 400 and 500 container vessels around the globe are believed to be in hot or cold lay-up and the number is expected to go up if the market situation fails to improve. Soerensen said UASC was going ahead with its restructuring programme by removing capacity from the Asia-Europe trades that have been hit worst by a drop in demand and adding it to more active trades such as the Middle East.