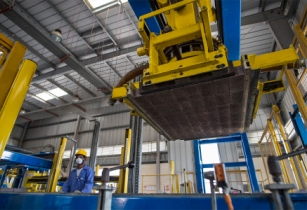 As reported in the Times of Oman, DILC has received a concession to manage 2,000 ha of land for medium heavy, heavy and petrochemical industrial land in Duqm.

Under the lease agreement, ACPD will develop a major block making plant. In addition, Assarain Group will also develop a modern and high-tech German plant, in line with its commitment to contribute effectively to the world-class infrastructure being built by the Special Economic Zone in Duqm (Sezad).

According to the source, the plant aims to produce high-quality building blocks, interlocking tiles, special products and another proposed plant under ACPD. The company is expected to supply to all the projects, housing and tourism sectors of Duqm and the Al Wusta region.

This megaproject in Duqm is set to facilitate further inclusive growth in Oman as well as in the region, said Khalid Said Al Wahaibi, managing director at Assarain Group.

Erwin Mortelmans, commercial director at PDC, also commended ACPD?s role in this project, which has positioned the company as a major growth engine in the sultanate?s construction, building material and infrastructure sectors.

In addition to Duqm, Assarain has multiple mega manufacturing facilities based in Muscat, Sohar and Dubai.