New York University Abu Dhabi (NYUAD) researchers are part of an international team of scientists who have introduced XENON1T detector, which directly measures the rarest nuclear decay process ever recorded by a detector 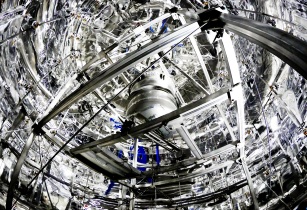 The XENON1T detector with its low-background cryostat is installed in the centre of a large water shield to protect the instrument against cosmic ray backgrounds. (Image source: XENON1T collaboration)

Using the XENON1T detector, an instrument located at the underground Gran Sasso National Laboratory in Italy, the researchers were able to observe the decay of Xenon-124 atomic nuclei for the first time.

This measurement, while not directly linked to the Dark Matter search, is relevant for nuclear physics, as it represents a first step towards the search for other possibly more elusive phenomena. The findings are featured on the cover of the current edition of the journal Nature.

The XENON1T uses 3,200 kilograms of liquid xenon at a temperature of ?95?C to look for interactions of dark matter particles with the xenon atoms of the detector. The xenon is contained in a cylindrical tank that is placed at the centre of a 700,000-liter water tank which further protects the detector from unwanted radioactivity. XENON1T is currently the most sensitive dark matter experiment in the world.

This study shows that the XENON1T detector is also able to measure other physical phenomena including double electron capture, a rare process that is typically obscured by signals from natural radioactivity.

Half-life measures the time it takes for half of the radioactive nuclei present in a substance to decay. The half-life measured for Xenon-124 by the XENON1T detector has the enormously large value of 1.8?1022 years for this process: approximately one trillion times longer than the age of the universe, making the observed radioactive decay ? the double electron capture of Xenon-124 ? the rarest process ever observed in a detector.

The XENON programme group consists of 21 research groups from the UAE and around the globe. NYU Abu Dhabi is an active partner through the research group led by Associate Dean of Science and Associate Professor of Physics Francesco Arneodo, who joined the University in 2013 after spending 20 years at the Gran Sasso Laboratory and more than a decade working on the XENON project.

The scientists are currently upgrading the experiment for the new XENONnT phase of their research, which will utilise a much larger active detector mass and a reduced background level to significantly increase the detector?s sensitivity.