Chloride attack is one of the most important factors when considering the durability of reinforced concrete, especially for structures in water and wastewater and other chloride-laden environments. Chloride attack leads to the aggressive corrosion of steel reinforcement, even in alkaline concrete, causing cracking and spalling and, in the worst cases, structural failure. Chris Lloyd, general manager, Intercrete division, AkzoNobel, explains 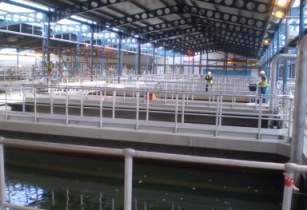 Steel reinforcement is protected against corrosion by the inherent highly alkaline environment of the concrete created by the release of calcium hydroxide from the cement hydration. This results in the formation of a passivating layer of ferric oxide on the embedded steel. As long as this surface film is maintained, the steel remains protected from corrosion.

However, when concrete structures are repeatedly exposed to salt spray or submerged in saltwater, chloride ions penetrate the pores of the concrete, eventually reaching the steel, breaking down this layer and causing corrosion.

There is also sufficient moisture present to increase the electrical conductivity of the concrete, leading to an aggressive form of localised corrosion called pitting corrosion. This can potentially cause rapid loss of steel section and major cracking and spalling of concrete, thereby compromising structural integrity.

In tidal and submerged zones, the concrete is saturated and oxygen levels are limited as the pores in the structures are constantly filled with water. Nevertheless, in areas where there is a low concrete cover, corrosion can still occur causing a challenge for its reinstatement. The depth and quality of the cover concrete are vital, as the relatively thin layer of concrete protects the reinforcing steel from corrosion by maintaining an alkaline environment and preventing the ingress of chloride ions.

The latest generation of cementitious coatings will overcome many of the limitations of resin systems and can be applied to damp substrates without risk of osmotic blistering. Offering high resistance to wash-out, they withstand immersion in as little as 60 minutes after placing. Their high-build application and rapid cure make them less susceptible to damage, especially during their early life.

Furthermore, as water-based systems, the environmental credentials are attractive, posing minimal risk in an application, with all equipment being washed in water after use. Testing on structures suffering from the carbonation that have been treated with such cementitious coatings shows that the concrete will re-alkalise and the depth of carbonation is reduced to afford further protection to the reinforcement, particularly in the presence of chlorides and the other fuels for corrosion.

The performance of the coating in this test is unparalleled. Not only has it shown minimal permeability and constant yet very low diffusion coefficients, but also it has not shown any signs of deterioration despite being fully immersed in a chloride solution for more than 28 years. From Vinci?s experience, many coating systems tend to degrade over time when on test in the cell. Even products that initially perform well can subsequently blister, resulting in more chloride ions passing through the product. Following the latest investigations and studies in concrete technology, Vinci?s internal testing can now determine a chloride ion diffusion coefficient from non-steady-state conditions.