The GCC region?s automation industry is on track for double-digit growth over the next five years, as recovering oil prices and economic diversification plans boost demand for industrial and building automation technologies, according to TechSci Research, a global consulting firm 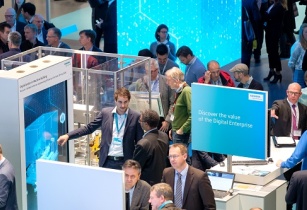 SPS Automation Middle East aims to gather professionals of the Automation, IoT and Artificial Intelligence industries under one roof, providing a dedicated platform for the latest innovations and solutions steering the region toward a smarter and high tech future. (Image source: Messe Frankfurt)

Global events including the Expo 2020 Dubai and mega projects such as Saudi?s NEOM city are major driving forces behind advanced control systems and processes in infrastructure development. In addition, a focus on the manufacturing sector led by Industry 4.0 indicates that companies are searching for technologies to boost production output at a higher quality.

The whitepaper stated that the GCC?s industrial automation market growth is further aided by a predominantly young and educated population that?s more aware of automation and its applications across various sectors including manufacturing and services.

Challenges hindering development include high initial investments in new technologies, while a lack of common standards among connected devices and communication protocols also needs to be addressed.

These challenges and potential solutions are among the many topics and issues that will be up for discussion at the inaugural SPS Automation Middle East conference and exhibition, which will take place from 18-19 September 2018 at Dubai?s Festival Arena.

SPS Automation Middle East aims to gather professionals of the Automation, IoT and Artificial Intelligence industries under one roof, providing a dedicated platform for the latest innovations and solutions steering the region toward a smarter and high tech future.

Some of the companies in the automation business that will be onboard during the event include BECKHOFF Automation, Bosch Rexroth, SICK, Pilz, and LAPP. Japanese headquartered Mitsubishi Electric is also a Launch Partner while American powerhouse Rockwell Automation has signed on as the show?s official Automation Sponsor.

Martin Palmer, general manager of SICK Middle East, said, ?From large logistics projects for roads, ports and airports through to the establishment of regional distribution hubs for multinational consumer goods companies, the UAE has established itself firmly on the regional industrial automation map.?

?Increasingly across the Middle East, we see automation becoming more relevant, especially as manufacturers seek to increase productivity and safety whilst the consumer demands higher quality and better value for money.?

Rami Al Ashqar, business development manager at Bosch Rexroth, said that the SPS Automation Middle East will be important to gauge the involvement of end users in regards to automation.

?We?re also keen to scope the OEM market in the region and I see a lot of potential here, especially with manufacturing being such a key element of the UAE 2030 vision. Saudi Arabia also has ambitious manufacturing plans, and German organisations such as the VDMA (Mechanical Engineering Industry Association) are already impressed by the level of technology in manufacturing in the Kingdom,? Al Ashqar added.

?The end users will drive the OEM business, and in some cases, it has already started with some companies integrating systems and putting manufacturing lines together. Just like the auto industry, which started slowly in the region, the OEM market will start as well,? Al Ashqar noted.

The SPS Automation Middle East Conference will feature a high-powered panel of speakers providing insights into how the policies and regulations governing automation affect the future of industries. It will also provide a detailed look at how companies are adopting new technologies to enhance production efficiency and explore areas of opportunity in the sector.

The exhibition aims to provide a broad cross-section of the nuts and bolts of automated manufacturing and building infrastructure, from Drive Systems and Components, Software, IT, and Mechanical Infrastructure, to Interface Technology, Power Supplies, and Human-Machine Interface Devices.