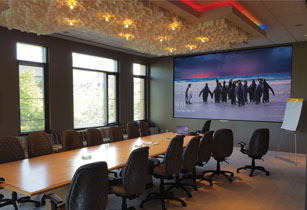 LED and video wall technology more generally, is starting to transform the way we think about space in the workplace and beyond , says Piet Vanhuyse of global technology company, Barco

WHEN A SPACE in a company building is transformed through a video wall that facilitates employee engagement, or an eye­popping visual display, LED is helping to transform the way people perceive that space. As members of the workforce interact with that video wall, it becomes a new centrepiece of the organisation, and most importantly, a vital part of that firm’s story.

What is LED and how did it come to be?

With humble origins reaching back as far as 1907, light­emitting diodes are simply solid semi­conductor devices that emit light when an electric current is passed through. To generate the dynamic and crisp light range that LEDs are known for, various materials are used to produce photons at different wavelengths and light of different colours. High­brightness red and amber LEDs use the aluminium indium gallium phosphide (AllnGaP) material system, whereas blue, green, and cyan LEDs use the indium gallium nitride (InGaN) system. Between them, they cover the entirety of the spectrum of light as their relative intensities are controlled to produce colour across the range.

LEDs first became popular in the 1970s, capturing the cultural imagination as displays on alarm clocks.

By the late 1990s, LED walls were being used as fixed installations in the retail and public signage sector, as well as at tradeshows and events. By the early 2000s, the size of the panels needed to mount LEDs on became smaller, and this helped pave the way for the types of creative use most associated with the technology. In 2003, the curved applications that dominate control rooms and broadcast environments to this day emerged. As time went on, display processors became smaller and integrated in screens, allowing smaller Digital Out­OfHome (DOOH) displays to leverage LED tech for smaller, more intimate spaces outside the usual markets that still demanded a visual punch. In line with the more intimate space that LEDs entered, 2017 saw the start of the narrow pixel pitch (NPP) era. Descriptive of the density of pixels on the screen, NPP means less empty space between pixels, which in turn means smoother borders between pixels, finer details, and a closer optimal viewing distance for those huddled around the screen.

Today, we see companies of all sizes and across a variety of industries tap into the potential of LED. For the viewers of Al Arabiya, the evolving thought process around LED and space meant being able to install three curved LED video walls that provided a hyper­realistic snapshot of the 24­hour news cycle. As viewing habits have evolved, so has the threshold for what a news organisation needs to represent to be authoritative.

The history of LED is still being made, and the trajectory of the displays of tomorrow is being written in stunningly crisp technicolour. While there are still certain pain points in the overall customer journey to be resolved, with the inherent fragility of the hardware during handling next to be tackled, the march towards finer pixel pitches will facilitate a redefinition of the way we see LED in workspaces. The history of LED is the history of the evolution of space, and the future looks bright.