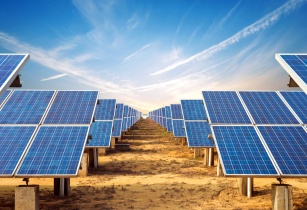 ACWA Power, one of the leading developer, investor and operator of power generation and desalinated water plants, has announced the financial close for the 1500MW Sudair solar plant, a key project under the Public Investment Fund (PIF) renewable energy programme

The launch of the Sudair Solar project was announced at the inauguration of Sakaka PV project in April 2021.

Sudair Solar is testament to the Kingdom's continuous efforts to reduce emissions resulted by the energy sector. The Ministry of Energy utilises its renewable energy Programme and local content development programme to enable the prosperity of this promising sector and its supply chains through various initiatives such as mobilising private sector investments and encouraging partnerships between the public and private sectors to create a competitive national market for renewable energy.

ACWA Power also announced that SAPCO, a fully owned company of Aramco, have joined the consortium with ACWA Power and Badeel, a company fully owned by PIF. The consortium, led by ACWA Power, embodies the strategic importance of the Sudair Solar PV project, the first project under PIF’s renewable energy programme. The programme aims to support Saudi Arabia’s ongoing energy transition and diversification, and to deliver 70% of the country’s renewable energy under the National Renewable Energy Program (NREP).

Aramco’s investment in the Sudair Project is its first participation with PIF in its renewable energy programme; reflecting the company’s efforts to advancing sustainable energy solutions within its operations and Saudi Arabia, where a variety of low-carbon energy solutions are being deployed.

Sudair Solar PV project, which is located at Sudair Industrial City, is set to become one of the largest single-contracted solar PV plants in the world and the largest of its kind in Saudi Arabia. A 25-year power purchase agreement for the plant was signed with the Saudi Power Procurement Company, with the tariff being among the lowest for solar PV projects globally.

Mohammad Abunayyan, chairman of ACWA Power, “The launch of Sudair Solar embodies a pivotal foundation for diversifying the energy mix and accelerating energy transition in the Kingdom, as well as transferring ACWA Power’s international expertise, knowledge and capabilities in the global renewable sector back to the Kingdom. The project will encourage Saudi companies to participate in the implementation of renewable energy projects and support local talent in cultivating the skills and competencies needed in this thriving sector, which constitutes one of the Kingdom’s key pillars for sustainable socioeconomic development."

Our involvement in the Sudair Solar PV plant reflects our efforts to advancing sustainable energy solutions, both within our own operations and the broader energy network. While hydrocarbons will continue to be a vital part of the energy mix for decades to come, renewables like solar have an important role to play in helping achieve the world’s climate goals, concluded, Mohammed Al Qahtani, senior vice president of Downstream at Aramco.