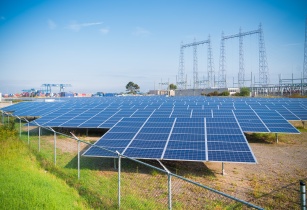 UAE has opened the 300MW first stage of the 900MW fifth phase of the Mohammed bin Rashid Al Maktoum Solar Park, launched by Dubai Electricity and Water Authority (DEWA) and is located in Saih Al-Dahal

In partnership with the consortium led by ACWA Power and Gulf Investment Corporation (GIC), DEWA has formed Shuaa Energy three to implement the project.

DEWA said that the Mohammed bin Rashid Al Maktoum Solar Park will be the world’s largest single-site solar park, with a planned total capacity of 5GW by 2030.

The solar park will contribute to the Dubai’s Clean Energy Strategy, which includes providing 75% of its total power capacity from clean energy sources by 2050.

The project features the advanced solar photovoltaic bifacial technologies, which facilitates the solar radiation to reach the front and back of the panels, to increase generation.

The fifth phase of the solar park is planned to be commissioned in stages until 2023.

The fifth phase of the solar park is expected to provide clean energy to more than 270,000 residences in Dubai, and reduce 1.18 million tonnes of carbon emissions per annum.

In November 2019, DEWA announced that the consortium led by ACWA Power and GIC as preferred bidders to build and operate the fifth phase.