Dubai Electricity and Water Authority (DEWA) has signed an MoU with Abu Dhabi Future Energy Company (Masdar) and ?lectricit? de France (EDF) to promote cooperation in developing and financing of the 800MW Phase 3 of the Mohammed bin Rashid Al Maktoum Solar Park, as per IPP as well as with EDF for a consultancy contract for the pumped-storage hydroelectric power station at Hatta Dam 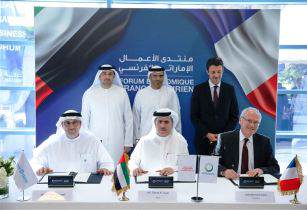 DEWA is building a 250MW pumped-storage hydroelectric power station in Hatta, which is the first of its kind in the GCC countries. It will make use of the water stored in the Hatta Dam, increasing the share of renewable energy.

The signing ceremony was attended by HE Benjamin Grivaux, French Secretary of State to the Minister of Economy and Finance and Mohammed Ahmed Bin Abdul Aziz Al Shehhi , Undersecretary for Economic Affairs in the Ministry of Economy of the UAE. The first MoU was signed by Saeed Mohammed Al Tayer, MD & CEO of DEWA; Jean-Bernard Levy, chairman and CEO of EDF Group; and Mohamed Jameel Al Ramahi, CEO of Masdar.

The Mohammed bin Rashid Al Maktoum Solar Park is the largest single-site solar park in the world, with a planned capacity of 5,000MW by 2030, and a total investment of US$13.6bn. The solar park contributes to achieving the objectives of the Dubai Clean Energy Strategy 2050, launched by HH Sheikh Mohammed bin Rashid Al Maktoum, Vice-President and Prime Minister of the UAE and Ruler of Dubai, to provide 75 per cent of Dubai?s total power output from clean energy sources by 2050.

The 800MW third phase of the solar park, is being implemented by Shuaa Energy 2, which was established by DEWA with a 60 per cent stake in the company. Shuaa Energy 2 was launched in partnership with the Masdar-led consortium, and EDF, through its subsidiary EDF Energies Nouvelles, who own the remaining 40 per cent of the company. The international consortium led by the renewable energy contractor GranSolar from Spain, is handling the engineering, procurement, and construction (EPC). It includes Acciona from Spain and Ghella from Italy.

?The MoU supports the directives of the wise leadership, headed by HH Sheikh Khalifa bin Zayed Al Nahyan, President of the UAE; and HH Sheikh Mohammed bin Rashid Al Maktoum, Vice-President and Prime Minister of the UAE and Ruler of Dubai, which constitute a roadmap for our ambitious initiatives and clean development projects in the clean energy sector. This is part of our efforts to achieve the objectives of the UAE Centennial 2071, the UAE Vision 2021, and the Dubai Plan 2021 to make the UAE the best country in the world, achieve sustainable development, and promote the welfare of citizens, residents, and visitors. This also supports the Dubai Clean Energy Strategy 2050, to provide seven per cent of Dubai?s total power output from clean energy sources by 2020. This will increase to 25 per cent by 2030, and 75 per cent by 2050,? said Al Tayer.

?The hydroelectric plant is part of the Hatta Comprehensive Development Plan, launched by HH Sheikh Mohammed bin Rashid Al Maktoum. The project will contribute to the development of Hatta, and meet its developmental, social, economic, and environmental needs. It will also contribute to the achievement of the Dubai Clean Energy Strategy 2050,? noted Al Tayer.

?DEWA?s initiatives within the Hatta Comprehensive Development Plan will involve Hatta residents in the projects that will be implemented and provide about 200 permanent jobs in the technical, administrative and operational fields, and over 300 jobs in the Visitors Centre, outreach and tourism facilities associated with the project, in addition to more than 2,000 jobs during project implementation,? added Al Tayer.

The pumped-storage hydroelectric power station will make use of the existing water stored in the Hatta Dam, which can store up to 1,716mn gallons, and an upper reservoir that will be built in the mountain to store up to 880mn gallons. The upper reservoir will be 300 metres above the dam level. During off-peak hours, turbines that use clean and cheap solar energy will pump water from the dam to the upper reservoir. During peak-load hours, when production cost is high, turbines operated by the speed of waterfall from the upper reservoir will generate electricity that will be connected to DEWA?s grid. The efficiency of power production will reach 90 per cent in response to demand for energy within 90 seconds.

?On the proud occasion of the President of France?s visit to the UAE, the MoU signing highlights the strength of our partnership with Dubai Electricity Water Authority and EDF Energies Nouvelles in developing Phase 3 of the Mohammed Bin Rashid Al Maktoum Solar Park,? said Mohamed Jameel Al Ramahi, CEO of Masdar.

?It also emphasises the critical value of public-private collaboration in advancing commercially viable renewable energy, here in the UAE and the wider region. Now under construction, the 800MW expansion of the Dubai Solar Park will be a benchmark for the global renewables sector on completion, a showcase of UAE expertise, and the capabilities of our international partners, across all aspects of utility-scale renewable energy project development. At Masdar, we are eager to build on our collaboration with DEWA and EDF to pursue future opportunities in renewable energy and clean technologies locally and internationally,? Al Ramahi added.

?We are proud to be supporting the energy transition in the UAE, in close collaboration with major local partners. Our involvement in innovative renewable projects such as Mohammed bin Rachid Al Maktoum Solar Park and Hatta hydropower plant demonstrate our know-how as a global leader in low-carbon growth. Both projects are aligned with the two key objectives of the Group?s CAP 2030 strategy: achieving 50 GW of renewable energy capacity by the year 2030 and growing our business in rapidly expanding markets such as the Middle East? said Jean-Bernard L?vy, EDF Group?s CEO and chairman.