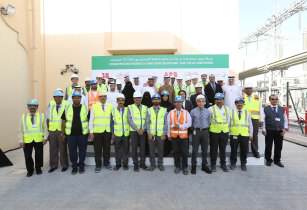 Dubai Electricity and Water Authority (DEWA) has inaugurated the 400/132 kilovolt (kV) substation at the Mohammed bin Rashid Al Maktoum Solar Park, which is the first-of-its-kind in the UAE to integrate clean energy with the traditional energy grid

The US$75mn substation has a conversion capacity of 1,515 megavolt amperes (MVA). The inauguration was attended by senior officials from Swiss firm ABB, the main contractors of the project, and senior staff from DEWA. The substation is one of the first projects of the Mohammed bin Rashid Al Maktoum Solar Park. It will transmit and transform electricity produced from solar energy and connect it to DEWA’s grid.

The first includes a 400kV substation with 11 gas-insulated switchgears (GIS). The second section converts from 400 kV to 132kV with a conversion capacity of 1,515 MVA. It includes three 400/132 kV interconnecting transformers. The third section has 21 GIS. The fourth section houses the control and safety facilities. ABB cooperated with a number of companies, including Energo and Comodor, to complete the project.

“I am pleased to welcome you all to the inauguration of the 400/132 kV substation at the Mohammed bin Rashid Al Maktoum Solar Park, which was constructed in adherence with the vision of HH Sheikh Mohammed bin Rashid Al Maktoum, Vice President and Prime Minister of the UAE and Ruler of Dubai, which is a roadmap we follow in all our work, initiatives, and development projects. This project supports the Dubai Plan 2021 to transform Dubai into the preferred place to live, work, and visit,” said Saeed Mohammed Al Tayer, MD & CEO of DEWA.

“DEWA works to build world-class energy infrastructure that meets Dubai’s development demands, as part of DEWA’s ongoing efforts to achieve its ambitious strategy and plans, to deliver the highest standards of availability, reliability and efficiency. Due to the importance of the project, DEWA directed ABB to adhere to the highest levels of health and safety, and to finish the project on time according to the highest quality standards. The project was successfully completed within 26 months. This is a record time for the construction of power stations with a capacity of 400 kV. No injuries or accidents were reported during the construction of the substation, which accumulated a total of 2.6 million man-hours. This reflects DEWA’s commitment to implement projects with efficiency, following up with operations, and monitoring the progress of all projects,” added Al Tayer.

Al Tayer noted that DEWA now is working on increasing the transmission capacity of the substation, and its efficiency, through three 400kV GIS bays, one 400/132kV Transformer (ICT) with a capacity of 505 MVA, nine 132kV GIS bays, and four 132kV shunt reactors.

“ABB is pleased to support Dubai’s clean energy vision by being a technology partner to DEWA at the Mohammed bin Rashid Al Maktoum Solar Park. As a leader in the energy revolution, ABB is perfectly positioned to support growth of renewables in the UAE energy mix and strengthen its power infrastructure,” said Frank Duggan, President of AMEA at ABB, adding, “The ABB substation at the solar park will be the first 400kV station in the UAE connected to integrate solar energy, facilitating reliable and efficient transmission of clean power. We look forward to continuing to support DEWA, which has earmarked sustainability as a key focus area to complement federal development plans for a green UAE economy.”