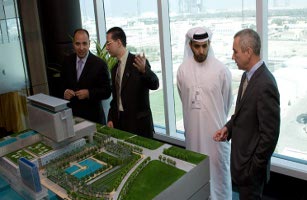 Mubadala GE Capital is a joint venture between the Abu Dhabi investment fund and General Electric (GE). Mubadala and GE agreed to contribute US$4 billion each to the venture, which aims to provide loans to medium-sized businesses to finance their growth.

United Power did not give full details of the sale of the preferred shares, which amount to 16.41 per cent of its total share capital, reported The National. Mubadala GE Capital acquired its shares by buying preferred shares from three of United Power's shareholders - National Trading Company, WJ Towell and Zubair Corporation.

"As a result of the transaction, the existing business of the company shall not be affected," said United Power. United Power is worth about US$40 million, according to Bloomberg data. The deal follows the purchase last year of a 32.8 per cent stake of the company by MENA Infrastructure Investments.

Mubadala and GE began commercial operations in May last year. In addition to a contribution of US$8 billion of equity to the venture from both sides, Mubadala announced it was aiming to become one of the US industrial giant's largest shareholders.

Ron Herman, CEO of Mubadala GE Capital, said: "We see significant future demand of commercial financing opportunities, initially in the UAE, then across the Gulf and Middle East and Africa region."