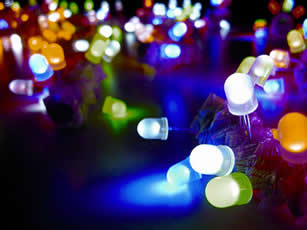 THE INCANDESCENT LIGHT bulb is disappearing from stores. It has long been superseded by a new generation of light sources. In tomorrow?s multimedia society colour displays the size of an apartment will generate crystal-clear images, and entire sports stadiums will be lit by high-performance lamps.

Light can also be used as a tool. Laser scalpels have become an indispensable part of medical technology.
These new lighting technologies are driven by energy-efficient light-emitting diodes. WACKER?s researchers have developed an innovative UV-curing silicone that makes it relatively inexpensive to manufacture the energy-saving light sources of the future.
Nothing travels faster than light. Both the internet and telephones rely on light waves. Fibre optic cables transmit light pulses around the globe at incredible speeds. But the last 10 years have seen not only a proliferation of data transfer; new visualisation possibilities have become established. Information is universally available on cell-phone displays; books are becoming e-books.
These technologies are exceptionally efficient thanks to energy-saving backlighting by light emitting diodes. ?High energy efficiency, a great colour range, stability, long life, brilliance and completely new design options are what make LEDs appealing for all lighting applications,? says Dr Klaus Angermaier, Senior Marketing Manager Transportation & Energy at WACKER. He points out that LEDs are shedding a whole new light on the market.

The incandescent lamp has finally had its day. Since 1 September it has been forbidden to sell 100W incandescent bulbs in the EU, and lower wattages are to be phased out by 2012.
Various lamp types are available as replacements, including improved incandescent, halogen and compact fluorescent lamps. LED technology is particularly attractive because of its high light yield, which doubles every three years or so. A conventional LED has achieved about 50 lumens/watt so far and it is likely this will be increased fourfold in the near future.
An incandescent bulb only manages 12 lumens/watt. But this is still the preferred light source in German households. Incandescents produce so much heat that you can burn your fingers on them. And just five per cent of the energy they consume is converted into light.
Experts estimate that private households in Germany could save up to US$1.8 billion per year by exchanging them. ?The EU expects that, in Germany alone, merely replacing incandescent with energy-saving lamps will save 7.5 billion kWh in private households. Replacing these with LEDs will save even more,? says Prof Norbert Huettenhoelscher of EnergieAgentur NRW.
?The energy saving for televisions with LED lighting can be as much as 50 per cent,? says Bernd Franke, head of strategy and information at the VDE Institute.
?Compared to fluorescent tubes, LEDs save up to 60 per cent energy and for much longer lifetimes.?
Initially LEDs are taking over our roads, where there is a particularly urgent need. ?According to the German Electrical Luminaires and Electrical Lamps Trade Associations [now known collectively as ?Light?], for example, 50 per cent of German cities still use street lighting based on 1960s technology,? the Professor explains.
Climate Protection Technologies, an initiative by the German Federal Environment Ministry, subsidises the modernisation of municipal street lighting. Only three per cent of these ?vintage? lights are replaced annually. Nationwide savings are estimated at 2.7bn kWh.
Prof Tran Quoc Khanh of Darmstadt Technical University has no doubts either. ?The street lamp of the future is the LED lamp. The potential for savings is huge.?
As LED performance increases, however, the materials such as lenses used must meet new challenges. Materials that have been used up to now can yellow under intense fluxes. So in future silicone will be preferred.
?Silicone elastomers have the necessary heat and light stability,? explains Dr Philipp Mueller, an applications engineer at WACKER in Burghausen.

With a new optical high-performance silicone, marketed under the trade name LUMISILR, optical lenses for LEDs are produced directly on the LED chip (see alongside). This method is particularly efficient and reduces the traditionally high production costs.
?Up until now, LED manufacturers had been using a complex injection moulding process to make the silicone lenses. With our product they can eliminate about five process steps,? explains Mueller.
The novel silicone is applied by conventional dosing to produce the optical element, which is then flash cured by exposure to UV light. The company?s chemists came up with a material blend that was suitable for this step and which also provided optimum adhesion.
Adds Mueller: ?The silicone has to bond equally well to both metal and plastic and must not cloud the LED lens.?
This new material has proved itself in practical trials. ?One of the world?s leading LED manufacturers has been convinced by LUMISILR, with its outstanding transparency, excellent mechanical strength and long-term resistance to extreme UV exposure,? he says.
The bright LEDs are simply unbeatable for use as spots and light-emitting surfaces. Energy-saving lamps have lifetimes of about 6-15,000 hours, but LEDs as much as 50,000. Analysts from iSuppli predict that by 2025 on in every three light sources will be an LED.
These diodes don?t just make sense financially. They also protect the climate. Prof Khanh of the Laboratory of Lighting Technology at Darmstadt believes that, with today?s technology alone, Germany could cut its carbon emissions by 1.6mn tonnes per year. In global terms, current LEDs could reduce the world?s energy demand by around 30 per cent as almost one-fifth is still consumed by lighting.
Technical advances could slash that by a further 30 per cent. This would save up to 650mn tonnes of CO2.
LEDs have been present in cars sold in the Middle East for a while now. Their energy-saving properties are much appreciated.
The low consumption of these diodes significantly reduces fuel burned, resulting in savings of several million litres a year in Germany alone. And LEDs have additional benefits for drivers. At night the road and curb appear in natural colours and the human eye can distinguish contrasts better.
They enable intelligent lighting control, in which the intensity is adjusted according to weather and traffic conditions.
?With them we can also serve major markets like the USA and Japan,? says Dr Bernd Pachaly, head of the company?s Elastomers Business Unit. ?We are expecting annual growth rates of 20 per cent.??? n