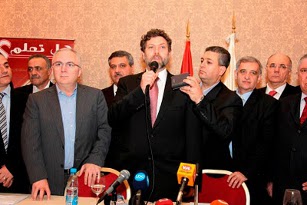 Lebanon's industrial exports increased by 8.26 per cent in 2010 to reach US$3.3 billion but the balance of trade deficit widened further.

A report from The Association of Lebanese Industrialists showed that the surge in industrial exports last year reflected the increasing capability of the manufacturing sector to meet international standards.

According to the statistics provided by the association, the number one exporting item was machinery and electrical equipment (US$74mn), followed by precious stones (US$658mn), metallic goods (US$460mn), agro food industries (US$324mn), chemicals (US$310mn) and paper (US$237mn).

The association added that the volatile situation in a number of Arab states had affected Lebanon's industrial exports to these Arab states with exports to Tunisia and Egypt currently on hold.

The association intends to make visits to several countries in Asian and European countries to promote the Lebanese industry sector and encourage new countries to import Lebanese goods.

The reason for the high monthly deficit which was the highest recorded in over five years was due to the higher number of imports combined with lower export figures. The Customs Directorate, however, said that the next couple of months will provide a clearer outlook of this year's trend, in view of increasing global oil and food prices.

According to the U.N's Food and Agriculture Organization, global food prices rose 28 per cent in the past 12 months and reached a record high in January 2011. Total imports increased by 39 per cent in January 2011, when compared to the beginning of 2010, to reach US$1.73bn.

Excluding mineral fuels and oils, imports have increased by around 17 per cent during the period, mainly due to higher imports of 'live animals and animal products' and 'unwrought and semi-manufactured gold, diamonds, precious stones and metals' by US$34mn and US$2mn, respectively.

Exports have decreased by around five per cent in January 2011, mainly a volume-effect with the volume of exports decreasing by seven per cent, when compared to January 2010. Despite the decrease in a few export goods, export of "iron and steel" increased by US$13mn due to a 53 per cent increase in volume.