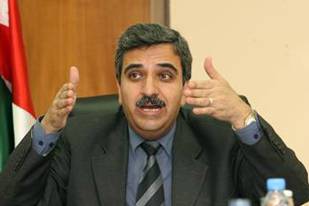 Abu Hammour, the finance minister said this will not jeopardise fiscal stability which is crucial for the country to attract foreign capital inflows. Jordan has not escaped the unrest sweeping the region and a new government was put in place last month under the leadership of Marouf al-Bakhit who decided to introduce a welfare package to deal with rising food prices.

The new government decided to draft a revised version of the 2011 budget rather than annex an estimated US$650 million in extra social costs as a supplement to an earlier 2011 budget passed by its predecessor last year.

Abu Hammour said substantial cuts in capital spending and projections of higher aid and revenues will ensure a slight rise in the deficit estimate to US$1.63 billion or 5.5 per cent of gross domestic product (GDP) against an earlier 5 per cent target. It hit 5.3 per cent of GDP in 2010.

The economy should grow between 3.5 to 4 per cent growth this year with signs of a steady rise in quarterly growth that reached 3.5 per cent in Q3 2010. Foreign reserves that hit a record US$12.2 billion at end of last year and covered eight months of imports were a strong indicator of confidence in the economy.

Total state revenues, including foreign aid, was forecast to increase 7.4 per cent to reach US$7.3billion in the new 2011 budget estimates against readjusted 2010 budget figures.

Jordan liberalised its energy prices several years ago but it retained subsidies that have recently included a freeze on further gasoline hikes to head off any kind of further unrest. Total grain and fuel subsidies allocated in the budget rose to US$478mn, a rise of US$190mn.