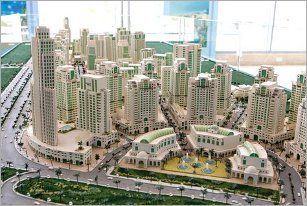 Saudi Arabia's construction sector recorded a big leap in Q1, with the value of contracts awarded by the government rocketing by more than five times over the same period of last year.

National Commercial Bank (NCB), Saudi Arabia's largest bank by assets, put the value of those contracts at around US$13.5 billion compared with US$2.37 billion in Q1 of 2010.

In a recent study, NCB said more than a third of those contracts covered the oil and gas sector and expected a sharp rise in contract value through the year following King Abdullah's initiative to hand out in excess of US$130 billion in benefits to citizens, including theconstruction of 500,000 houses.

"The momentum that was witnessed during the end of 2010 has continued into the first quarter of 2011 as the total value of awarded contracts reached US$13.2 billion. The ongoing priorities to grow the kingdom's economic and social infrastructure as was set-forth in the 2011 budget has allowed the construction sector to continue its impressive growth," the study said.

It said the value of contracts was the result of several mega-projects being awarded in sectors such as the transportation, oil and gas and power sectors.

The oil and gas sector alone accounted for nearly 38 per cent of the total value of awarded contracts followed by the transportation and industrial sectors, each garnering 18 and 10 per cent respectively

"The US$13.5 billion in awarded contracts during Q1 of 2011 represents a significant jump compared to the same period last year when around SR8.8 billion worth of contracts were awarded," the NCB study said.

In addition, the Construction Contracts Index (CCI) reached 187.6 points to end the quarter, compared to Q1 of 2010, which witnessed the CCI at 79.02 points. The CCI climbed to its highest point in February, reaching 225.5 points.....given the high value of awarded contracts during Q1'11, the CCI is off to a fast start, similar to 2009.

The study said this suggests that the value of awarded contracts is expected to progressively increase through the second half of the year.

Furthermore, the 2011 budget has put a significance on the construction of many healthcare centers and educational facilities, of which the awarded contracts are likely to occur during the second half of 2011.

A breakdown showed the Kingdom's Eastern Province held the majority share of awarded contracts due to the value of those that are associated with the oil and gas, power and water sectors.

The western province of Makkah had around 16 per cent of the awarded contracts, mainly due to a significant railway contract being awarded as part of the Haramain high-speed railway project.

The study said it expected the Eastern Province to maintain the highest portion of awarded contracts in 2011 due to the presence of oil and gas fields.

The report showed February was the busiest month in terms of contracts awarded, with a value of around US$6.98 billion, more than half the total.

'The construction sector continues to display its resilience as it started the year on a strong note. The value of awarded contracts typically increases during the second half of the year. However, we witnessed an accelerated level of awarded contracts during the first quarter as the magnitude of expenditures by the government led to an increase in mega-project signings,' NCB said.

The two announcements made by King Abdullah during the quarter, which called for nearly US$134 billion worth of financial support, will have deep ramifications on the construction industry.

Most notably will be the construction of 500,000 housing units in the amount of US$66 billion as well as the provisioning of US$4.3 billion to the Ministry of Health to implement and expand several medical projects. While these projects are geared toward the long-term, the construction sector's outlook appears to be very favorable.