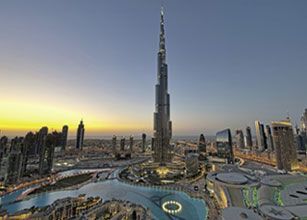 Omicron technology is used to test the partial discharge of power supply to the Burj Khalifa tower.

Last January, another chapter was added to the book of world construction history when, in the Emirate of Dubai, the tallest building in the world opened its doors for business. The Burj Khalifa climbed to an impressive height of 828 meters (2,720 feet) in its six-year construction period. Some 12,000 people now live and work in the megatower. Beside a large number of apartments and offices, the Burj Khalifa is also home to a luxury hotel and a total of four swimming pools. However, meeting the power demands of this magnificent structure – with a peak daily load of 50 MW – was a real challenge.

The power supply to the tower and the surrounding buildings is provided using so-called dry-type resin-encapsulated transformers, which offer advantages over oil-insulated transformers of the same output in terms of fire protection and ease of maintenance. More than 70 RESIBLOC® transformers from ABB are used to supply the Burj Khalifa. These reduce the 11 kV supplied to the building to a level of 400 V or 200 V. However, despite all the advantages that the dry-type systems offer over oil-immersed transformers, there is also a disadvantage. When partial discharges occur within the transformer insulation, the insulation materials suffer permanent damage, which becomes more severe over time and can ultimately lead to the failure of the transformer. The logical consequence of this is a power failure. However, this would cause serious problems, not least due to the 54 elevators that operate in the 189-story building. The components used in dry-type transformers are therefore subject to stricter quality requirements, during both manufacture and testing.

Measurement of this extremely low PD level of 10 pC and below places great demands on the measurement technology employed. Not only must it correctly and securely record the charge value, it must also be capable of suppressing almost all external interference, such as that generated by production machinery and cranes, to set the conditions that allow a sensitive PD measurement to be taken.

Due to the high production volumes of dry-type transformers in the 1,500 kVA or 1,000 kVA class, such as those used in the world's tallest building, the partial discharge measurement must be performed within the production environment. However, generally there is insufficient time or space to perform PD measurements in specially screened measuring cabins. This means that the measuring system itself must ultimately be capable of suppressing any interference. Several diverse approaches can be employed as active interference suppression measures.

Besides high-performance digital filters, the MPD 600 allows targeted gating of interference pulses that can occur more or less randomly. The class of line-based synchronous interference, caused, for example, by inverters or phase angle controllers, can be masked on the MPD 600 through a large number of small, freely positionable windows. The independent certification of the MPD 600 measuring system also guarantees full conformity with the common international standards.

The MPD 600 has demonstrated its ability to cope with all these tasks, a fact which is further reinforced by its use in many drytype transformer production plants. The ABB facility in the German town of Brilon, where the RESIBLOC® series is manufactured and tested, has two three-phase PD measuring systems in place to allow the performance of the prescribed partial discharge measurement in two test bays in parallel, at the same time as the induced withstand voltage test

The transformers provided for the "Burj Khalifa" project did not display any unusual partial discharge activity during measurement with the MPD 600. This represents a clear advantage in terms of safety for the operation of all the electrical systems within the building complex.