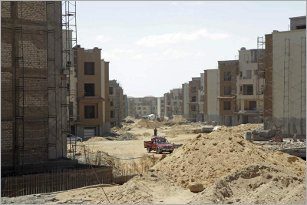 Housing projects in Egypt could see delays in delivery to clients and even face cancellations due to impact of the recent revolution in Egypt, according to a report by Jones Lang LaSalle.

The Egyptian revolution will have an impact on the speed of decisions made by the new government who will not want to be accused of favouritism and will proceed with any new developments cautiously, which in turn could negatively impact the real estate sector.

The government could also launch investigations into corruption on previous property deals. "The most significant area of uncertainty lies in the validity of legal title offered by major developers, which are viewed as benefiting from the patronage of the previous administration," said the Jones Lang LaSalle report.

With a few cancellations already announced, Jones Lang LaSalle feels that "between 25 per cent and 30 per cent of the supply originally scheduled for handover in 2011 will be delivered in 2012 or later," after discussions with developers in Egypt.

Jones Lang LaSalle said the property market in Egypt, which before the revolution was one of the fastest growing in the region, had slowed considerably from the beginning of the year.

But the report expects a strong recovery in the medium to long term because of the "fundamentals" of Egypt: strong demographics; a cultural connection between property and marriage; and the country's strategic location.

"We are confident that the current situation is only temporary," said Ayman Sami, the head of the Egypt office of Jones Lang LaSalle Mena.

If anything, 2011 would represent a 'lost year' for Egypt's real estate market "as decisions to lease or purchase real estate delayed until the 'dust settles' and greater certainty returns to the market after the planned elections," the reported concluded.