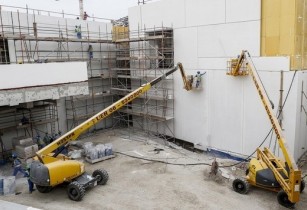 Louvre Museum in Abu Dhabi is a reflection of the deep friendship of the Arab and French nations, according to Haulotte Group

Designed by French architect Jean Nouvel, Haulotte Group will participate in this first universal project in the Arab world through its dealer United Gulf Equipment (UGER).

The museum is currently more than 95 per cent complete and is expected to open in December 2016 or January 2017.

Louvre Abu Dhabi will display works of historical, cultural and sociological significance from ancient times to the contemporary era. By presenting different civilisations in the same spaces and galleries, universal themes and common influences will be highlighted to illustrate similarities and exchanges arising from shared human experience going beyond geography, nationality and history.

A significant number of Haulotte products supplied by UGER has been used in Le Louvre Museum. Most of them are the diesel articulated and telescopic big booms. The newly upgraded Haulotte HA41RTJ Pro which has a maximum outreach of 19.8 metres and the best lifting speed in the market with less than 40 seconds.

The HA20RTJ with its optimal productivity with the best comfort and safety feeling is perfectly up to the task. It features an ergonomic and spacious designed platform, and fully proportional, simultaneous controls for more accuracy and smoothness of movement. This allows an optimal performance while the machine is working in the installation of the stars of the complex geometric pattern of the dome whereas the H25TPX was ideal for reaching the most difficult working areas and increase time efficiency and productivity.

The importance of this project lies in redrafting of the traditional elements of Arabic architecture in a modern way with advanced technologies such as the vast steel dome – an emblematic feature of Arabian architecture, evoking mosque, mausoleum and madrasa – will create a ‘rain of light’ effect on the visitors walking below and cover two thirds of the museum.

al Falaj inspired water system, based on Arabian engineering, is an irrigation system form of a series of water channels runs through the museum and will make the space into an oasis. The architectural plan of the museum is similar to the traditional Arabic souks, which will be semi-covered by the dome. Haulotte Group said that the design is a seamless collaboration between traditional local culture and modern construction techniques.

“As Haulotte Group, we are proud and happy to be part of this universal project which is not only a museum for displaying art only, but a huge historic project which will contribute to Abu Dhabi becoming a hub for world cultures and will activate the cultural exchange between the UAE and France.” stated a representative of Haulotte Middle East.