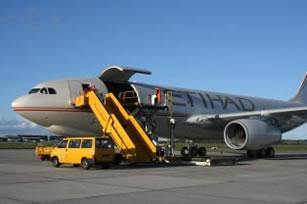 The new deal will allow Etihad passengers to travel from Casablanca to the Moroccan destinations of Agadir, Laayoune, Fez and Marrakech, adding Nouakchott in Mauritania and Dakar in Senegal in the near future.

"An important part of Etihad's growth strategy is to offer customers access to as many global destinations as possible, whether this be through opening up new routes of our own or through strategic agreements with other airlines, adding breadth and depth to our network,? said James Hogan, Etihad Airways CEO. ?The expanded cooperation with Royal Air Maroc will significantly enhance access to destinations for our customers flying beyond Casablanca throughout Morocco and to West Africa.?

Etihad has also announced plans to operate flights to Bengaluru, the capital of the Indian state of Karnataka, from January 1st, 2011. The Abu Dhabi-based airline will launch with four flights per week to Bengaluru initially, increasing daily flights from March 27th, it said in a statement.

Bengaluru will be Etihad's eighth destination in India and the 66th worldwide.