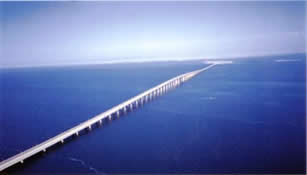 Expansion work will begin next year to increase the capacity of the King Fahd Causeway, which links Bahrain and Saudi Arabia, to handle up to 100mn passengers a year. The plan will include the construction of two 400,000 sqm artificial islands, one on the Bahrain side and one on the Saudi side of the causeway.

Saudi Arabia customs manager and King Fahad Causeway director-general, Saleh Al Khileiwi, recently announced that tenders will soon be issued for this major project and said that each of the islands will include 48 lanes for incoming and outgoing traffic, according to a report by Gulf Daily News. This forms a 167 per cent increase and means that the causeway will carry 100mn passengers per annum once the long-term project development plan is complete.