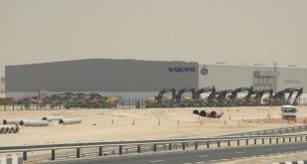 Volvo has taken the initiative to open a new parts center to get machine parts to dealers and customers quickly and efficiently and to maintain customer machine uptime – crucial for those working on harsh desert jobsites.

Before building the parts distribution center (PDC) in Jebel Ali in 2006, Volvo Construction Equipment (Volvo CE) had maintained a presence in UAE to assist with the Middle East's sales needs, but when dealers needed spare parts, they had to wait for shipments to arrive from Eskilstuna, Sweden.

"Having the PDC in Dubai has had a positive impact on the machine availability situation in the Middle East," says Anna Norinder, general manager of the parts center.

"It is a very important part of Volvo CE's commitment to delivering ultra-reliable machines."

Because it's open six days a week and operates a call-out service on the seventh day, the PDC contributes strongly to the overall uptime of machines in the region. Having a local Middle Eastern PDC has also been good news for dealerships, which now need to keep fewer parts on hand in their own facilities.

Norinder maintains that the PDC's existence demonstrates Volvo's commitment to the Middle East – while proving that Volvo is at the forefront of service leadership in a region where many competitors, instead of maintaining their own PDCs, are still shipping parts in from elsewhere.

"We have been here for five years already, and in that time, we have demonstrated our local expertise and proved our dedication to the region – all while making parts delivery significantly more convenient for our dealers," she explains.

Looking to the future

The center is running efficiently with a low level of order errors, but that isn't good enough for the PDC. Despite celebrating its past, the parts center is looking to the future and examining how it can provide even better service to its dealers and Volvo CE's customers. That includes shortening lead times, constantly fine tuning processes and further developing the services being offered.

"We'll continue to work closely with our dealers in the future, of course, and we will focus on integrating ourselves even more deeply into the logistics chain," Norinder says.

"We will further optimize the flow of parts to dealers in the region and continue supporting them so we can keep on providing great service to our customers."