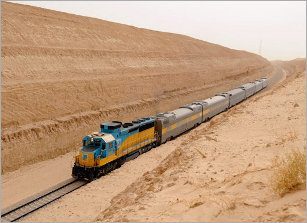 The Saudi Railways Organisation awarded 9.38 billion Saudi riyals (US$2.5 billion) in contracts to two consortiums, which include Germany's Deutsche Bahn and Italy's Astaldi, to build four railway stations in the kingdom, it said recently.

The winning consortiums were led by Saudi Bin Laden Group and Saudi Oger. The high-speed Haramain Railway will link Makkah and Madinah to Jeddah, a key entry point for millions of pilgrims, and to King Abdullah Economic City.

Up to three million pilgrims visit Makkah every year and struggle to make it to Madinah after conducting the annual Haj, or head back to Jeddah on overloaded buses and taxis. Saudi Bin Laden Group's consortium included Deutsche Bahn and Turkey's Yapi Merkezi while Saudi Oger led a group that included Astaldi, Ansaldo, Singapore's ST Electronics and Al Seif and Atkins.