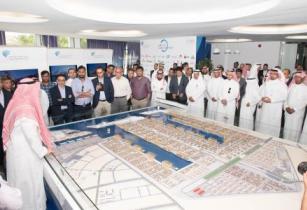 In its first visit to the Kingdom, MSC MINA, one of the world?s largest container ships, has docked at King Abdullah Port, the Saudi Arabiaport with a capability to receive the largest vessels in the world

The docking occurred amidst a warm welcome and in the attendance of representatives from the port?s management, officials from the Economic Cities Authority, several government agencies active in the port, and representatives of major clients, who boarded the mega vessel to observe its massive size and capacity, and to learn about its components and advanced technologies.

The MSC MINA has a capacity of 23,656 TEUs and features a length of 400 meters, a breadth of 61 meters, and a draft of 16.5 meters. In regards to container storage, MSC MINA can accommodate 24 rows of containers, with a height of 13 containers per row. Classified among the MSC Megamax-24 category, the largest category of container vessels in the world, the MSC MINA helps reduce fuel consumption on the container level according to transport experts and therefore helps reduce overall transport costs and carbon dioxide emissions.

In 2013, King Abdullah Port announced its partnership with MSC and one year later received the MSC LONDON, which was the largest container ship to dock at a Saudi port at that time, followed in October 2015 by the MSC MAYA, the world?s largest at the time.

King Abdullah Port is characterised by its powerful, state-of-the-art infrastructure and the world?s deepest 18-meter water berths. It is equipped with the world?s largest and most advanced cranes, which utilise the latest technologies and feature a lifting capacity of up to 65 tonnes.

The port recently announced the completion of the largest trade operation of its kind in the kingdom with the receipt of 28 of the latest Liebherr cranes as part of the new phase of the container terminal expansion project.