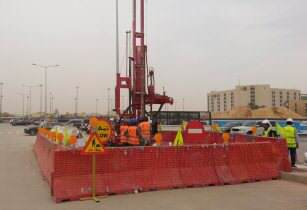 ACTS is working on the north of Line 1 of the Riyadh Metro, which encompasses drilling of boreholes and logging them using acoustic tele-viewers. (Image source: ACTS)

ACTS officials said that they have allocated geotechnical experts to oversee drilling and logging works to conduct testing and analysis along two of the six metro lines being constructed in Riyadh. In addition, six drilling rigs and a range of modern equipment have been mobilised for this project.

The company is working on the north of Line 1, which encompasses the drilling of boreholes, logging them using optical and acoustic tele-viewers and other advanced techniques, as well as assessing the sub-surface ground layers. A scientific testing program is being carried out simultaneously on the extracted cores to assess soil properties. stated officials.

Khaled Awad, chairman of ACTS, said, ?These are exciting times for ACTS. The region is undergoing a massive infrastructure boom and ACTS has become the preferred choice in inspection, testing and geo-engineering works in critical and large-scale projects. Our involvement in the geotechnical engineering works of Riyadh Metro reinforces our commitment to excellence in all our services and our strategy of partnership with our clients for a successful completion of their projects.?

Mike Hann, engineering director of BACS, said, ?ACTS was selected because of their demonstrated ability to perform to the project?s technical and schedule requirements. We are satisfied with their contribution to this critical project which demands outstanding performance from all the engineering parties and subcontractors.?

In addition to the Riyadh Metro project, ACTS is also executing similar operations on projects like the King Abdulaziz International Airport and the Kingdom Tower, both situated in Jeddah.