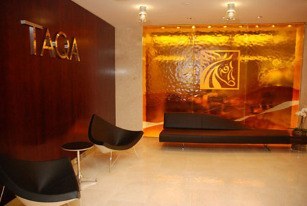 Abu Dhabi National Energy Company PJSC (Taqa) Power and Water division posted a 17 per cent increase in revenue to hit  US$520 in Q2 2011.

This year-on-year increase was primarily due to the contribution from Fujairah 2, which was transferred to Taqa in the third quarter of 2010 and fully commissioned in January 2011.

Taqa produced 16,215 GWh of electricity and 53,280 MIG of water during Q2 2011. Global technical availability was 96 per cent for the second quarter of 2011, in line with the performance of Taqa's power assets in previous quarters.

During the summer months, Taqa's domestic Power & Water assets experienced an increase in demand for their services due to the seasonal effects of higher temperatures in the region.

Throughout this period of high demand, Taqa's domestic power plants generated 12,576 GWh of power and desalinated 53,280 MIG of water. Technical availability was high at 97 per cent.

Completion of the first of two phases at Shuweihat 2, a 1,500 MW and 100 MIGD plant, was originally scheduled for June but was delayed to mid-July. The first unit (750 MW, 50 MIGD) is now operational and the second unit (750 MW, 50 MIGD) is expected to be completed in October 2011. Taqa received liquidated damages of Dhs60m during Q2 2011 in relation to the slight delay to completion of the first unit.

Taqa's international power portfolio, which comprises of assets in Morocco, Ghana, India, Saudi Arabia and the USA, generated 3,639 GwH of power during the second quarter. International technical availability was 91 per cent increase compared to the same period last year.

In Morocco, the Jorf Lasfar plant has continued to perform at a high level of technical availability during the quarter, generating 2,633 GWh of electricity. The Jorf Lasfar 700 MW expansion project continued to progress to schedule with construction commencing on the major civil works for the project earlier this year. Commissioning and takeover of units 5 & 6 is planned for the end of 2013 and early 2014, respectively.