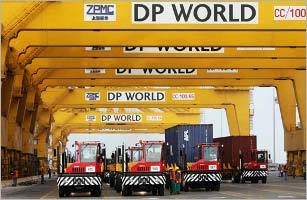 Comparitive volume growth was equally strong at 9 per cent when matched with last year, the company said.

Chairman Sultan Ahmed Bin Sulayem said: "DP World delivered another strong performance in the final quarter of the year despite the macro economic uncertainty. Our flagship terminal in the UAE has yet again exceeded all expectations delivering another record year as it continues to position itself as the gateway port of choice to handle cargo destined for the Middle East, India and Africa regions."

"Whilst uncertainty continues to affect the global economy, our business is still performing well. We made good progress through the fourth quarter of 2011 and we will achieve 2011 full year EBITDA in line with expectations. Lower than expected net financing charges will benefit reported profit before tax," he added.

DP World operates more than 60 terminals across six continents, with container handling generating around 80 per cent of its revenue.